The moniker ‘Independent‘ is bandied about the wine trade with such regularity we tend to ignore it more often than use it as a useful tool. What does it mean to be ‘independent’?

Independent Wine Merchant:   This should be an easy one! Does it mean ‘not part of a group’ or owned by a bigger group? Well, no is the answer or O’Brien’s Wines with 33 stores (I think….look out for the transformation of Molloys at Nutgrove to an O’Briens soon) could hardly be considered an independent – neither could Fine Wines or indeed O’Donovan’s claim the distinction even though Gary O’Donovan is the current chair of NOffLA (The National Off Licence Association).  At the other end it can’t possibly mean stand alone stores only or excellent stores such as Mitchell & Son or Curious Wines or The Corkscrew or The Wine Buff franchised outlets or McHughs could never be described as being independent …… besides if it did mean this then ‘independents’ would be prohibited from ever expanding their business!

‘Independent Wine Merchant’ seems to translate only as a negative ie Not a Supermarket! Mind you this doesn’t always work. I can remember Searson’s Wine Merchants (now gone but parts are still alive in Tindal Wines) treated O’Brien’s Wines as a multiple and as they would not supply multiples they refused to supply O’Briens!! As for me I still think of SuperValu outlets as being independent and franchised. Ah, I hear you all telling me that SuperValu has a centralised buying department at Musgraves and they take their wines through that route. Agreed. They do – but some stores choose much better than others which wines to stock and when to sell them.

If you think that’s muddied the waters try ‘Independent Wine Producer‘. I know dozens of these and meet them all of the time. They’re the ones who own their own business – right? mmmm, well, almost. How independent is a family owned wine business leveraged to the hilt with the banks? Won’t they have to run their trade according to who they can find as customers? Otherwise they’ll go broke. How independent is that compared to the big, solvent multinational free to make its own decisions as to who to sell to, what to make and when to expand?  Gallo is the world’s biggest wine producer, is family owned and is independent. But that’s not really who we’re talking about when we use the term ‘Independent’ now, is it?

My absolute favourite is ‘Independent Wine Writer‘. This is used all of the time to imply impartial and objective judgement. What it really means is someone working freelance. Maybe its the wording but these days this reminds me of ‘sellswords’ in ‘Game of Thrones’! (Maybe mercenary is going too far …. ) How do ‘Independent’ wine writers visit regions of interest? They are brought there. How do they taste so many wines? They are given them. They may be capable of independent judgement but wine writers are actually beholden to the trade they are supposedly independent of. The only way around this is to mention the where and when (and who paid) of the wine that was tasted. Does it not seem odd to you that your fave wine writer on a Saturday morning suddenly delivers brilliant detail about the wines and restaurants of a small island in the  middle of nowhere. They have either been there or they’re plagiarising or they’re chancing their arm. Every wine writer needs to have an accessible code of ethics page. (Look up Jancis Robinson’s (or mine) – they’re brilliant! Basically if someone gives us a bottle of wine then its business. If they give us a case of wine its a bribe!)

‘Independent’ in the wine trade is extensively used to imply that its wearer is better in some way than others in the same trade. NOffLA tells us that, ‘In excess of 600 wines were submitted to The Irish Wine Show Star Award adjudication panel of NOffLA judges and independent wine writers‘. These writers work for newspapers and will now report on their own findings. At times wine writers have been proven over the years to be biased towards style of wines that have been favoured by the very publications they write for!! Circular wine writing is rampant and if its not circular it can often be fashionable. Who’d have thought Prosecco and Pinot Grigio would command more space than Cava or Chardonnay? 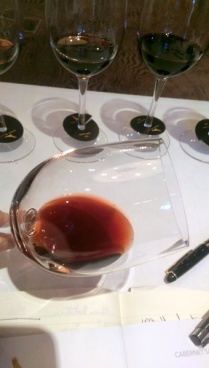 What to do? Well, lets agree that its useless to describe merchants or producers simply as ‘Independent’. It means nothing unless we’re told what they are supposed to be independent from or what the independence actually is. As for writers, first of all Be Honest. Tell us who paid for the trip or the sample. Then tell us what your personal preferences are. Do you love Chardonnay and so you might not always give a Sauvignon Blanc the thumbs up? Have you lived in South Africa so long that you don’t recognise the brilliance of Chilean Cabernet Sauvignon? Maybe (as one wine writer/educator in Dublin used to tell his students) you just think all wines from Chile are crap anyhow?! Maybe you’re  a paid consultant to a wine company in the trade already? Maybe you have full time paid employment other than your wine writing? Just tell us. Give us context. Somewhere. Because if you don’t you are not truly Independent at all.

Do we need Independent’s? In the true sense of needing honest brokers, yes we do. We most certainly do. Do we have them? Now there’s the rub!

Last week BWG Wines & Spirits sent out twelve wines to ‘the press’. I was one of them. I like Italian wines and I really like the laid back full fleshy and soft fruit feel of their PASSORI red from the Veneto (€10.99 regular/€9.99 on special). 60%Merlot gives it softness and fleshiness while the 40%Corvina gives it backbone and richness. Super style. Available nationwide in Spar, Eurospar, Mace and Londis stores.

I'm a wine writer, wine educator and podcast at Kevin Ecock's WinePod from Ireland. My work appears in Checkout Magazine, Hospitality Ireland and here on WineIreland.blog As a member of the Association of Wine Educators I lecture and teach as often as I can! View all posts by Kevin Ecock